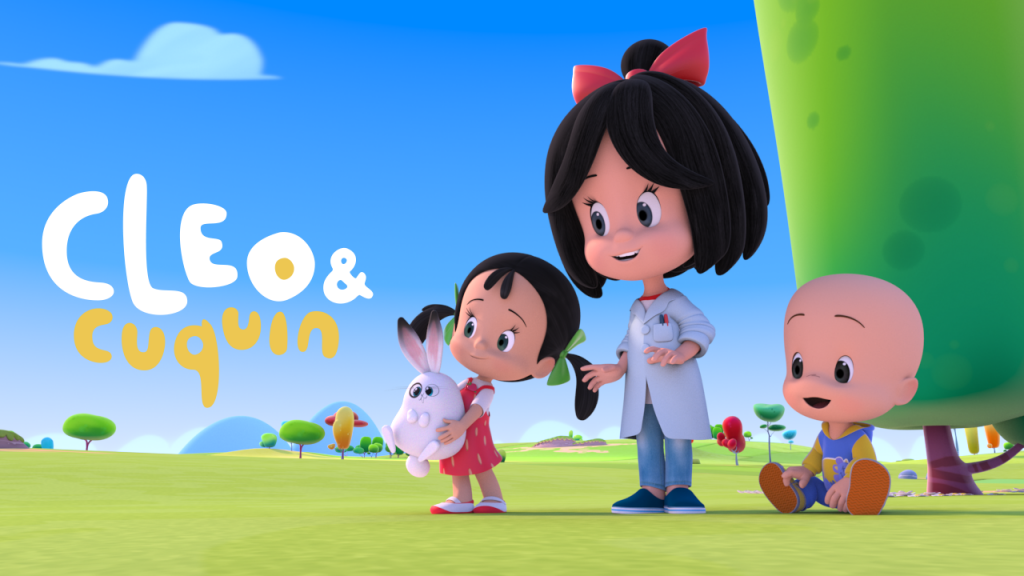 The books will be aimed at children aged 4 to 5 and will be on sale in Spain and Latin America.

The first book formats are due for release in spring 2018.

Anima Kitchent and Penguin Random House Grupo Editorial have reached a publishing agreement for children’s books based on Cleo&Cuquin. A range of book formats will be published, including story books, educational books, early reading books, painting and colouring books and activity books, and will be on sale from standard retailers in Mexico, Spain and the rest of Latin America as of spring 2018.

Broadcasting is set to begin on Clan (Spain), Discovery Kids (Latin America), Televisa’s Canal 5 (Mexico) and Hop (Israel) in November 2017, a few months prior to the Cleo&Cuquin book launch, to give the young viewers time to get to know the series.

Cleo&Cuquin (52×7’) is targeted at pre-schoolers aged four to five and features the Telerin brothers and sisters, especially big sister Cleo and the baby of the family, Cuquin. Every episode sees the little kids tackle a big adventure as Cuquin’s mischief gets Cleo and her brothers and sisters into trouble, and they come up with solutions the only way kids know how: by playing! They pretend to be astronauts, gardeners, detectives, monsters or whatever they need to be to get the job done. Best of all, at the end of every episode, Cleo figures out what she wants to be when she grows up… at least for that day!

Familia Telerin was a brief cartoon aired by TVE in the late 60s which was hugely popular as it featured a catchy song telling kids it was time to turn off the TV and head for bed, helping parents with the tricky task of settling them down for the night. The clip aired for two decades in Spain and was also broadcast in Latin America, where it featured in TV programming for many years.

With a view to rekindling this success and a clear international approach, Televisa joined forces a year ago with Anima Kitchent, MAI and Selecta Vision to co-produce the new transmedia brand based on the Familia Telerin.

Cleo&Cuquin has brand new scripts, updated characters and a meticulous design. As well as the TV show, the brand boasts apps including the “El Acostador” bedtime app, web content and music video clips. Cleo&Cuquin launched on the Familia Telerin’s YouTube channel, and after just a year and a half its 17 music video clips have chalked up over 600 million views and 1.5 million subscribers.

Toy maker Mattel recently announced that it had been awarded the worldwide Toy Master License for Cleo&Cuquin. The first line of products is set to be rolled out in Mexico in time for Christmas 2018, following the TV debut of the show in the North American country. This initial expansion into the international market will be underpinned by broadcasting agreements in a range of markets in the coming months, which will position Cleo&Cuquin firmly as a strong global brand.

In relation to the agreement, Víctor M. López, CEO of animation house Anima Kitchent, said: “For content like Cleo&Cuquin, which is seeking to position itself as an entertainment brand, a strong publishing strategy is key; Random is the perfect partner to approach that challenge with absolute confidence. Books are a source of fun for kids and help forge very positive links with parents, which we see as a way of instilling reading habits in kids from a very early age.”

Gemma Xiol, literary director in the children and young readers division at Penguin Random House Grupo Editorial, said: “This agreement offers us a magnificent opportunity to contribute to the success of a brand that has all the right ingredients to become a hit with the youngest readers. At Penguin Random House, we strive to offer our readers the best content; Anima Kitchent is a strategic partner for us, thanks to its market knowledge and its ability to create high-impact brands with positive values.”