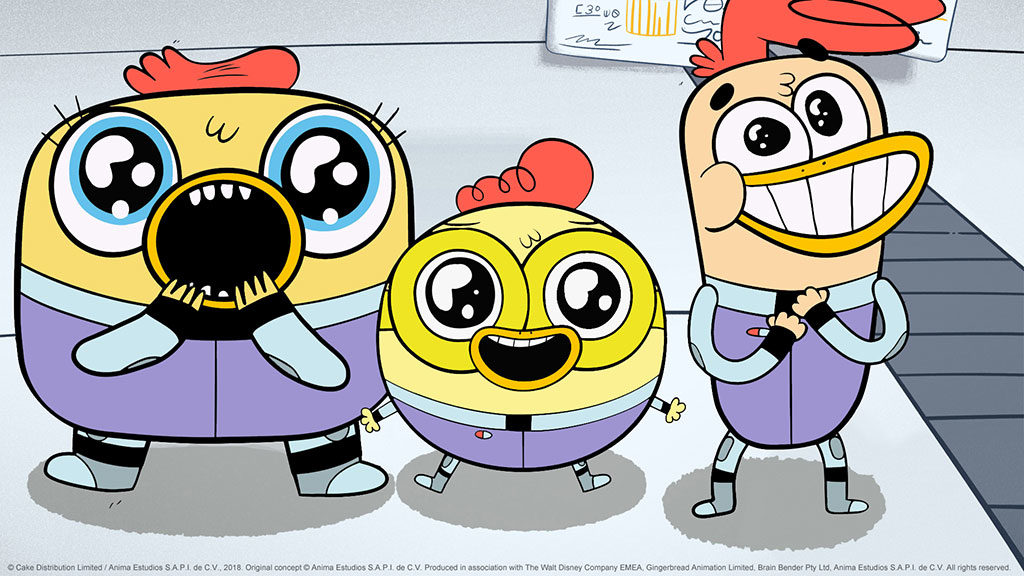 3 films theatrically released in different countries, 2 TV series released – one of them reaching #1 ranking in Spain, México and Latin America -, more than 2.6M views in YouTube and with presence in the most popular SVOD platforms.

We started 2018 with a very successful release in theaters of The Legend of Charro Negro. This film is part of “Las Leyendas” saga, which has demonstrate being one of the Mexican audience’s favorites letting each film surpassed the previous release with bigger box office earnings breaking records along the way.

In February, we announced a co-production with Disney (EMEA) and Cake Entertainment (UK): Space Chickens in Space, a TV series that tells the story of a trio of chickens who are mistakenly taken from their homes and enrolled in an elite intergalactic former military academy. Their funny adventures were released in November in Disney XD Europe, Middle East and Africa and will continue through the rest of the world.

Átomo Network, the digital platform for animated content in Spanish, created by Ánima and Frederator Networks, after two years of its launch stands as the most powerful in the world. With 197 affiliated channels in YouTube, more than 9.2M subscribers, 4 international web series, 3 original web series and AtomiK.O. its new channel focused in videogames, demonstrates its leadership with 1.1B views.

Here comes the Grump has its first theatrical release in Italy becoming the most successful animated film of the year in this country until The Incredibles 2 opened. The film was released too in South Africa, Israel, Singapore, Hungry, Russia, UK, Kuwait and South Korea among other countries while in Mexico opened in July 27th. In its English version, stars the voice talents of Ian McShane (Pirates of the Caribbean), Toby Kebbell (Planet of the Apes) and Lily Collins (Mirror Mirror).

After 3 years of its creation, Cleo&Cuquin YouTube channel, sums +3.2M subscribers, +1.5B views, +6.5B minutes watched and it is among the YouTube Europe ranking of most watched channels.

The film Ana & Bruno, released in Mexico’s theaters in August 31, ended up being the most awarded animated film of the year winning the Best Animated Film in Ibero-American Animation Quirino Awards, aniother one at Canacine Awards (Mexico) and has already multiple nominations in prestigious Festivals and awards ceremonies that will take place in 2019.

Since October, exclusively in Amazon Prime, kids can enjoy of the TV series Awesome Magical Tales. This tells the story of Jeremiah, Fury & Trafalgar, who like most kids, they’ve got their own ideas about what’s important in life, and glass slippers and wicked queens are not on the list!

On December 5th, Cleo&Cuquin arrived at Netflix. The complete series of the most successful pre-school TV show about the adventures of the siblings Telerin are now available in the popular SVOD platform. Up to date is the #1 TV show in Spain, Mexico and Latin America.

For all these reasons, we can proudly say that 2018 has been a big year for Ánima!